Media Release issued by the States of Alderney

More than 200 people attended a busy drop-in session at Alderney’s Island Hall yesterday (October 17) to find out more about proposals to modernise and future-proof the Island’s airport.

Among those asking questions of high-level representatives from the States of Guernsey Policy & Resources Committee, the States Trading Supervisory Board, Guernsey Ports and Aurigny were young parents concerned about the Island’s future for the next generation.

Local businesses and young professionals also left their desks to express their support for the Airport Rehabilitation Project. Afterwards, the representatives considered that around three-quarters of the people they spoke to were strongly in favour of an extended runway and refurbishment of the terminal and fire station.

Ian Carter, Chairman of Alderney’s Policy & Finance Committee, said: “We’re delighted with the positive response. Those attending were well engaged and the mood was extremely positive especially among younger members of the community who were saying they need this development for their and their children’s future.

“Of those taking a negative position, not one has said they will leave the Island if we build this, but the opposite could be true for the younger generation – some have said they would consider leaving if we were unable to create a regenerated airport. It’s that important to them.

“While for the States of Guernsey the debate may understandably focus on the business case, which clearly shows Option C+ (i.e. the longer runway) to be the best value for money, the Alderney community also see this very much as a key determinant in the social and economic fabric and health of the island in the years ahead.”

Leading the delegation from Guernsey were Chief Minister, Deputy Peter Ferbrache, and Deputy Peter Roffey, President of the States’ Trading Supervisory Board.

Before the doors were opened at the Island Hall, a round-table meeting took place between the visitors and States of Alderney Members to discuss the details including Alderney’s financial contribution to the project. The Island’s Policy & Finance Committee has agreed to this in principle.

A policy letter has been submitted for consideration by the States of Deliberation in Guernsey recommending an extended runway and full airport rehabilitation, expected to be debated at the end of November.

As well as a new, extended runway at Alderney Airport, the project would include development of a new terminal and refurbishment of the existing airport fire station, both of which are now at the end of their lifecycle.  ENDS 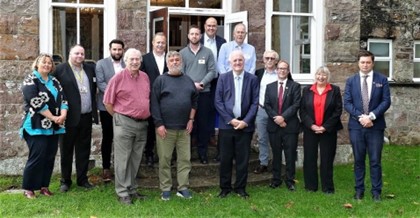 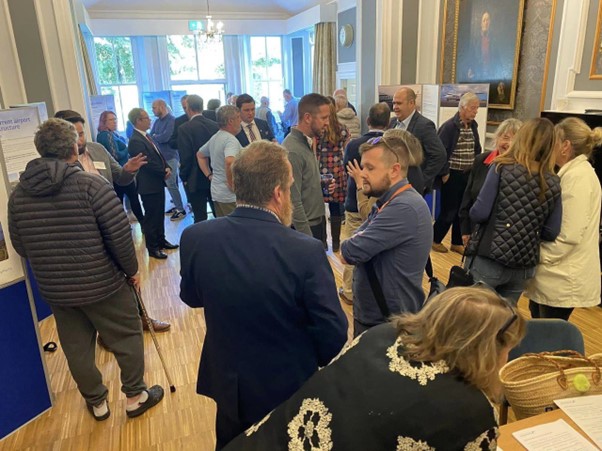